Have you ever finished a paper and felt like you just can’t look at it any more because you’ve been staring at it for so long? Using a text editor or generator is one exciting way to get a fresh look at a paper. There are an endless number of free online programs that can help you reassess a piece that you’ve written, whether it’s a blog post, a poem, a short story, or a research paper. Two types of programs that you can run a text through, whether in its entirety or in part, are:

Each of these programs can give new perspectives on a piece of writing that may seem stagnant.

There are a variety of free word cloud generators available on the Internet. Some of these include Jason Davies Word Cloud Generator, Wordle, WordItOut, and Tagul. Below is an example of a world cloud created by running the text from our tutor bios through the Tagul generator. The larger a word appears, the more it has been used in the entered text. As you can see from our word cloud, the tutors are a bunch of people who have majors and minors and who love to write and to spend their time on a variety of activities (apparently our preferred pet is a cat). Because of this feature, making word clouds can be a fun way to see which words appear most frequently in your text. Perhaps you will realize you have been subconsciously using a word more than you should. Maybe you will be able to see that your text has focused more on an idea than you originally thought you would (which means you should schedule an appointment at the Writing Center to adjust your thesis statement accordingly!). Either way, using a word cloud generator is a great way to get a new look at your writing. 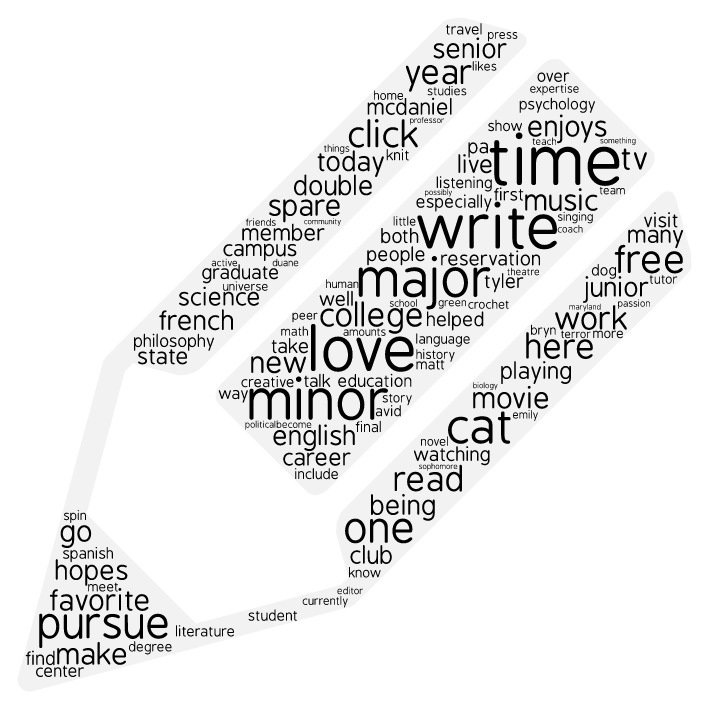 There are also a number of text editors that are referred to as “Up-goer Five Editors.” After copying and pasting text into these kinds of editors, they will essentially highlight or underline any words that are NOT one of the thousand most commonly used words in the English language. This seemingly absurd concept was first made popular by a group of scientists who made a comic attempting to explain the Saturn V moon rocket using only the “ten hundred” most common words – hence the name “Up-goer Five.” In this way, it can be a very useful tool for highlighting jargon. While discipline-specific terminology is wonderful to use with targeted audiences, general papers or presentations are a different case. Works that are shared with a general audience should avoid these words – or actively define them so that audience members can understand the progression of ideas. It is important to remember, however, that a limit of only the thousand most common words is a little bit overkill, so please proceed with caution (all the underlined words in the sentence were highlighted by Up-Goer Five text editor)!