I’ll confess … I love lawn games. Badminton, croquet, horseshoes … and most importantly BOCCE! So selfishly, I organized a Writing Center bocce night. None of the tutors even knew what bocce was before this event, but they’re generally good sports and go along with my crazy ideas. So Kaylan, Marya, and I grabbed the bocce set (full disclosure: Marya carried it for me) and headed out to Red Square. I was worried that no students would want to join us, but when we got out there, a small crowd was waiting for us! Hooray McDaniel students! Eventually, Michael and Mikayla joined us, and we even met Jake Fine, who is running for sophomore Homecoming King. I have no idea about the other candidates, but he seems like #AFineChoice. 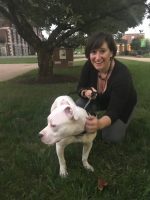 We went over the rules, and while it may not have been a “regulation” bocce court, the patch of grass by the big bell was perfect for our game. I can’t speak for anyone else, but I had a ton of fun … and I even got to meet Mikayla’s dog, Ice. He might have been a bit too excited by the pellino, but who can blame him? Bocce is awesome!

The real dark horse of the evening was Marya, who as it turns out, is a really solid bocce player. She says she’s not athletic, but the bocce court says otherwise. We also met a few McDaniel students who grew up playing bocce, so that also made me feel a lot less like a nerd for suggesting it!

We’ve got more social events planned for the rest of the semester, with more being planned all of the time. On October 2nd, we’re going to be drinking tea (or coffee) and eating cookies in the Hill Hall Lobby. And then on October 26th, we’ll be watching Goosebumps in Hill Hall 108 to celebrate Halloween (costumes are definitely encouraged).

All of us at the Writing Center are excited to get a chance to meet students outside of the typical tutoring session. So if you want to get to know the tutors, come out to our next social event and introduce yourself! We’re more than just a grammatically correct face.